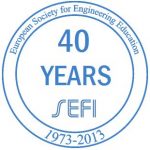 330 delegates and 40 SEFI Fellows from 33 countries met in Belgium during four days to discuss and share views and experi-ences on “Engineering Education Fast Forward 1973 > 2013 >>”. This Conference marked also the 40th Anniversary of SEFI, for which 50 special invited guests came from all over the world.

Among welcoming words from President of SEFI, Prof. Wim Van Petegem, the Rector of KU Leuven Prof. Rik Torfs, the Vice-Rector Prof. Georges Gieten, the Vice-Dean Prof. Yolande Berbers, and by Prof. Ludo Froyen, we were pleased to count Mrs. Lesley Wilson , Secretary General of EUA (European University Association), who offered some views on Higher Educa-tion in the 1970’s at the time of SEFI’s creation.

The SEFI Annual Conference 2013 was remarkable for many different aspects: the excellent presentations, the interesting pa-pers presented by colleagues from all over the globe, the strong presence of former SEFI presidents, Leonardo da Vinci Medalists, Fellows… Not to mention the wonderful locations of our Gala Dinner in the Faculty Club of KU Leuven and the Con-ference Banquet in the University Hall. This year awards ceremony has also been very intense, organized in the Promotiezaal of the University Hall and with 4 awardees.

Listen to a preview of the first season by Neil Cooke and Natalie Wint: 🔗https://shows.acast.com/european-engineering-educators/0-neil-and-natalie-introduce-the-podcast…

Dear Members of SEFI, I am pleased to inform you that the 2022 General Assembly of SEFI…

SEFI thanks the retiring Secretary General

After more than thirty years of service to SEFI and the SEFI community, its Secretary…