Engineering Education on Top of the World: Industry-University Cooperation

It is amidst the thousands of lakes and vast extents of forest of Finland, in Tampere, a city historically industrial and at the forefront of new in-dustries, that the SEFI 2016 Annual Conference brought together a broad variety of Engineering Education actors from Europe and beyond. In total 303 Participants from over 32 Countries met this year at Tam-pere University of Technology. We thank all the organisers and all the participants for making of SEFI 2016 a success and a truly memorable event.
The Conference was opened by the Rector of the Tampere University, Prof. Mika Hannula. During the Opening Ceremony the audience was greeted by the Conference chair Prof. Hannu-Matti Järvinen, the President of SEFI Prof. Martin Vigild. SEFI-EEDC Chair (European Engineering Deans Council), Dr. Mike Murphy reported on the 2016 European Convention of Engineering Deans and the London Agenda published as a SEFI Working paper on our 2017 Convention to be held in TU Munich on the kind invitation of Prof. Gerhard Mueller. Prof. Pieter de Vries reported on the 2016 SEFI Debate which was held in the European Parliament. Representatives of our partner organisations honoured us with their presence and conveyed messages of their support for our ongoing coopera-tion during the opening ceremony, among which the President of BEST, Mr. Adrien Merlier, ASEE Representative Dr. Sheryl Sorby, while Prof. Axel Zafoschnig Vice-President of IGIP joined us the next day. The SEFI Board of Directors also took a moment to welcome the numerous new-comers to the SEFI Conference.
More than 150 papers were presented in the course of 8 parallel ses-sions covering the theme of the conference Engineering Education on Top of the World: Industry University Cooperation and structured around different sub-topics such as University-Business cooperation; Engineering Skills; Sustainability and Engineering Education; Quality As-surance and Accreditation; Continuing Engineering Education and Life-long Learning; Open and Online Engineering Education; Ethics in Engi-neering Education; Curriculum Development; Attractiveness of Engi-neering Education; Physics and Engineering Education; Engineering Edu-cation Research; Gender and Diversity; and “I feel brilliant”.

Keynote presentations were given by Dr. Mervyn Jones Imperial College (UK) on “Engineering, Industry and Education: A Personal Perspective”, by Prof. Gary Downey Virginia Tech (US) on “Leading through Technical Mediation? Engineering as Problem Definition and Solution”, by Aldert Kamp, TU Delft (NL) entitled “Better make It Real” and Ville Korpiluoto on “Demola – Build-ing Innovation Culture”.
Another highlight has been our University-Business Plenary Round Table, chaired by Mr. Xavier Fouger, Dassault Systemes and Member of the SEFI Board of Directors, with the participation of our corporate partners representatives: Mark Fry, Granta Design, Alex Tarchini, Mathworks, as well as Michel Haddad, National Instrument. This year the round-table was on the theme of “New Skills for New Jobs-New Tools for New Skills”. 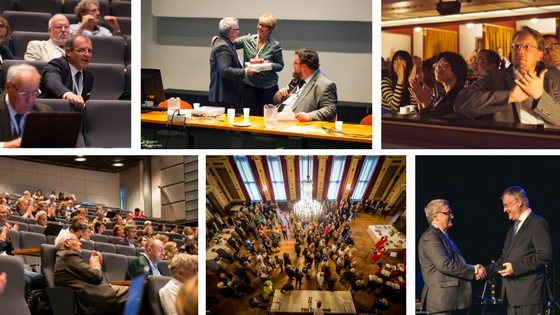 This year, the Board of Directors of SEFI had decided to award SEFI fellowship to two very highly dedicated members of our society.
The first recipient was Prof. Wim Van Petegem, former President of SEFI for the period of 2011-2013. Prof. Van Petegem has been for many years actively involved in different university networks (EuroPACE, EDEN, IACEE, MEDEA and Coimbra Group), and of course SEFI. Wim was elected in the SEFI Administrative Council in 2005 and was later elected President for the pe-riod of 2011-2013. During Wim’ Presidency was notably celebrated the 40th anniversary of SEFI in the context of the remark-able Leuven 2013 Conference. But also under Wim’s Presidency was organised the memorable 2012 conference in Thessalo-niki in Greece. Under his lead, SEFI also acknowledged the Values for which the Society stands and around which it evolves. From 2001 till 2012 he was the head of the Media and Learning Center (AVNet) and later he became Director of the Teach-ing and Learning Department at KU Leuven. Currently, he is Professor at the Faculty of Engineering Technology at KU Leuven.
The second recipient was Prof. Burkhard Alpers. Prof. Alpers is an individual member of SEFI since 2002. He is a professor for mathematics and computer science in the Department of Mechanical Engineering from Aalen University of Applied Sci-ences. Burkhard was a very active member of the SEFI WG on Mathematics, and therefore he became its Chairman in 2008. During Prof. Alpers’ chairmanship in 2013, the group published a new version of the famous and well-known report entitled “A Framework for Mathematics Curricula in Engineering Education”. This report is the third one of a series initiated in 1992 under the Chair of Peter Nüesch (EPFL) and in 2002, under the Chair of Leslie Mustoe (Loughborough University). 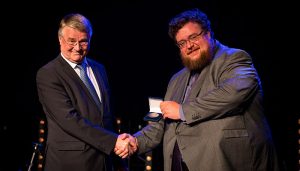 The European Society for Engineering Education (SEFI) awarded Markku Markkula the Leonardo da Vinci Medal in recognition of his outstanding contribution of international significance to engineering education, during the SEFI Annual Conference 2016 in Tampere, Finland. He is the thirtieth laureate of the distinction, which is the highest award in European engineering education.

“The President of the EU Committee of the Regions, Markku Markkula, is a personality who has put his mark on and influenced engineering education and inspired many educators for more than two decades” professor Martin E. Vigild, President of SEFI, said when announcing the decision. “Thanks to his leadership and his visionary thinking engineering education in Europe continues to develop.”

Following in the footsteps of Jacques Delors, who was the first person to be awarded the Leonardo da Vinci medal in 1983, Markku Markkula stressed the importance of European dimension in achieving significant social changes, the value of an entrepreneurial mind-set and the need to continue learning beyond formal education. “We should all be open and eager to react to the challenges around us. This requires seeing which opportunity doors or windows are open and then being ready to take immediate action.” he said. He called for a continuous willingness to collaborate and co-create before recommitting to underline the importance of cities and regions as drivers of change in his capacity as President of the European Committee of the Regions.

Once again, we would like to thank the Tampere University of Technology team that hosted us and organised this memorable event, the Conference Chair Prof. Hannu-Matti Järvinen, Ms. Tiina Niemi, all the students and of course all those who contributed to this event, especially our wonderful participants.